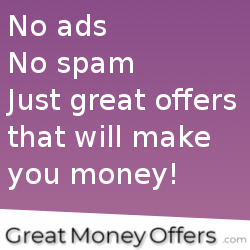 Google gave me 30 days to update my app then SUSPENDED it after just 4 days!

I hope others will find this article useful. It’s really not a rant, I’m passed that now, and I’m no longer expecting to hear from Google, as now, after months of trying to contact them, I have sadly concluded they don’t care.

This article is just a warning to fellow developers to be very careful with third-party SDKs and with Google constantly changing the goalposts with their policy updates.

For me, it all began on the 24 of June, I received an automated email from Google to notify me that one of my applications has a non-compliant version of Vungle SDK. This was due to a version in the beta channel (production release was compliant!) was using an out of date Appodeal SDK. 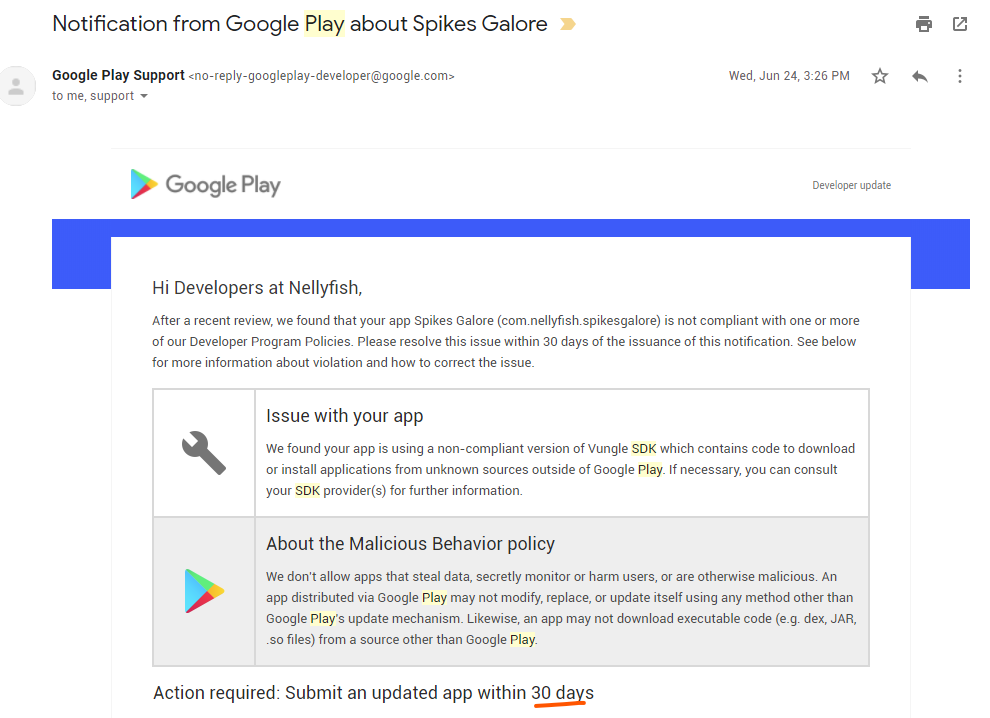 Extremely concerned with this, I started removing the Appodeal code and reverting back to Google Admob. Fortunately, or so I thought, the email clearly stated I had 30 days to submit an update. I went down the route of completely removing the Appodeal code instead of updating the SDK, as I was worried that it uses a lot of other SDKs within, which was the cause of this issue. Also, I built it using libGDX and Appodeal no longer support this, which was why the SDK was out of date.

Before I was able to publish the compliant code, I got another email from Google, just 4 days later. 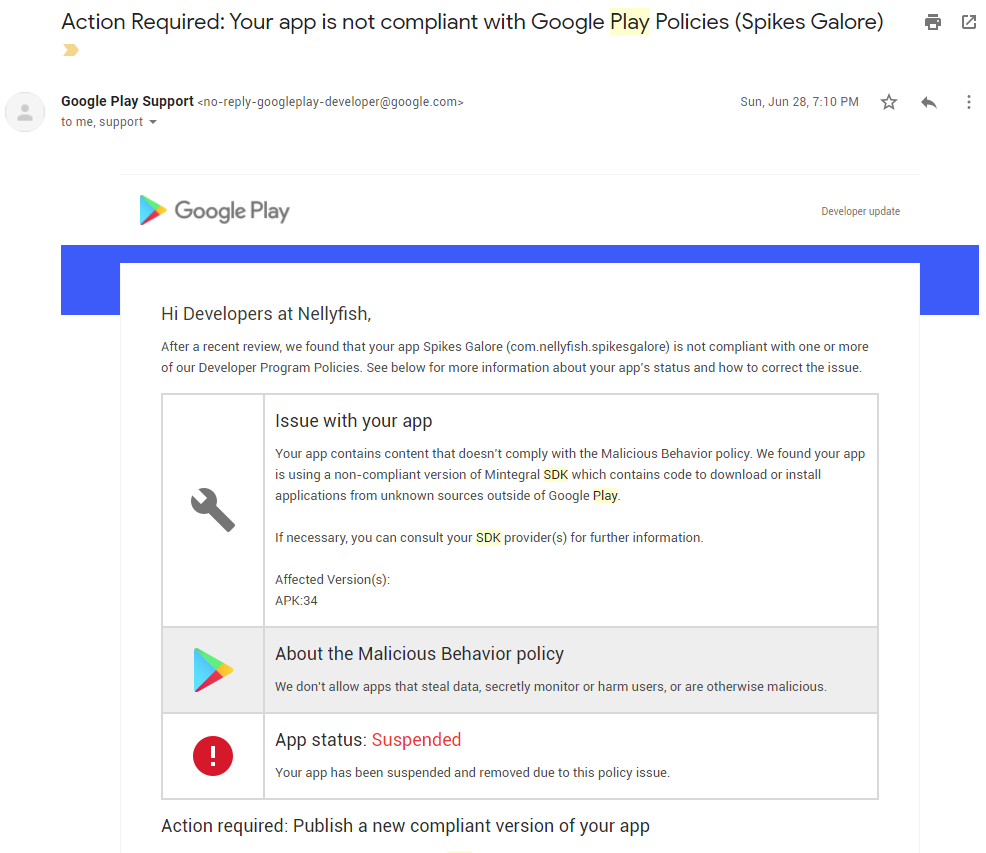 This was for the same beta release. My app was suspended due to an additional SDK within the Appodeal SDK! At this point, I started the appeal process. I don’t remember exactly what was written within the appeal to Google Play as it was submitted via a webform, but it was along the lines of being very worried for my account, and I had an update ready, but you suspended the app just 4 days after the initial warning, not the 30 days stated.

Their automated reply said that I used non-compliant versions of Mintegral SDK and Vungle SDK (both are within the Appodeal SDK) and if my account is in good standing (you would think they would know!) to upload a new package. 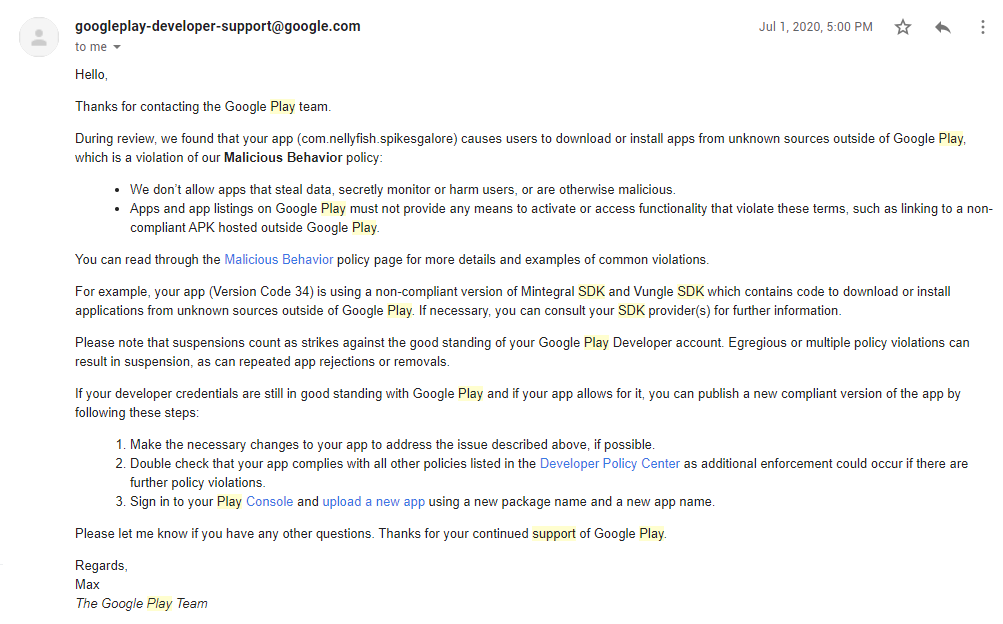 I responded by thanking them for their reply and “I have completely removed the appodeal plugin from my app, as I am deeply disappointed that this code was within their sdk. I was ready to update the new beta release, but you suspended my app after only a few days, when your original email said that I had 30 days to correct it. This is extremely unfair, as I was fixing the problem well within your timeframe. I am now worried about my account.

Can you please unsuspend my app, so that I can put the compliant code in? I can do this straight away.”

I got an email back with the response that read “As much as I’d like to help, I’m not able to provide any more detail or a better answer to your question. In our previous email, I made sure to include all the information available to me.” then forwarded me to the Developer Policy Center for more help.

At this point, I contacted Appodeal to highlight my disappointment that their SDK had suspended my app. They did respond quickly to highlight that I was using an out of date SDK (a bit late now). Still, Dmitry was helpful with a more detailed response on the Mintegral SDK and recommended that I appeal again with some additional information. He seemed optimistic about the situation that did make me hopeful and lightened my anxiety.

So my second appeal to google was as follows…

My app was deleted and access to publishing was blocked by mistake.

In my project com.nellyfish.spikesgalore, I use Appodeal SDK, an older version of which contains Mintegral SDK with the dangerous permission: android.permission.INSTALL_PACKAGES

This came to my attention when you sent me an email to correct within 30 days. But my app was then suspended just 3 days after the email! I did not manage to remove Mintegral SDK and the dangerous permission within that time.

I would like to assure you that this occurred by mistake and bear no malicious intent.

Could you give me back the right to publish updates so I can correct this mistake?

I promise to update all branches (alpha, beta, and internal testing version) and remove the dangerous permission.

Thank you for your understanding.

For those of you still awake and keeping note, there are actually two SDKs in question Minegral and Vungle both rolled up within Appodeal SDK. But, as it seems the Mintegral SDK was the one that caused the suspension, I highlight just that one to make the appeal less complicated also the message used exactly the maximum characters allowed.

No response from Google Play Developer Support.  At this point now very worried about the situation I emailed them for an update.

Would you be able to give me an update on my appeal?  I'm sorry to chase but it has been over 2 weeks and I am extremely worried about the situation.

The app in question had a release in the beta channel that I had mistakenly used an out of date SDK from Appodeal with a non-compliant version of Mintegral SDK within.  I was made aware of this from an email that you sent me on 24th June.  The email stated for me to resolve the issue within 30 days, but my app was then suspended only 4 days later.

Please, would it be possible for me to have publishing rights back on my app so that I can publish the compliant APK? I have it ready to go.  I am really sorry about this and there was no malicious intent from my side.  I have completely removed the Appodeal SDK from my compliant release and will no longer be using them, as it concerns me greatly how Appodeal has so many ad networks within the SDK, all with their own SDKs. In fact, you will see that I have now removed Appodeal from all my other apps in your Play Store.

I understand that the advice from the automated email is to submit a new package name but I am hoping that you would be able to give me the opportunity to update my existing app.  I am extremely worried about having the suspended app in my account, as, if I understand correctly, it would only take one more suspended app and my account could be closed.  If this was to happen my indie developer career for Android would be over and the last 4 years would have been a waste,  I hope you can understand this would be extremely upsetting for me and over the last few weeks the worry has been affecting my mental health and I have had trouble sleeping.

I'm sorry for the long email, I hope you can help.

No response, I started to wonder if the googleplay-developer-support@google.com was not monitored,  so I contacted them via a website.

It's been over 3 weeks since I appealed and I am extremely worried.

My app had a release in the beta channel that I had mistakenly used an out of date SDK from Appodeal with a non-compliant version of Mintegral SDK within.  You advised me on 24th June, to resolve it within 30 days, but my app was then suspended only 4 DAYS LATER.  Why?!

Would it be possible to have publishing rights back on my app so that I can publish the compliant APK? I have it ready to go.  I am really sorry.  There was no malicious intent from my side.  In fact, you will see that I have now removed Appodeal from all of my apps in your Play Store.

I am extremely worried about having the suspended apps in my account, as, if I understand correctly, it would only take one more suspended app and my account could be closed.  This would mean my indie developer career for Android would be over and 4 years wasted.  This is very upsetting and is affecting my sleep.  Please help!

At this point, I got an email from Claire a Google Play Support, but unfortunately, she was unable to help.  She replied with “I'm happy to help you with issues related to publishing and distributing apps through the Play Console.

At this time, my team is not able to provide policy violation support. I forwarded your question to the appropriate team at Google, and you can expect to hear from them soon”

As you can probably guess “...expect to hear from them soon” didn’t happen.  After a week I emailed Claire back but was ignored.

So that’s it, I give up.  I had hoped to start writing a new game this year, but I am seriously reassessing If I should continue developing.   All it would take is a policy update from Google that I missed and possibly one more suspension and my account could be closed.  4 years of development over!  Can I really invest any more time with that looming over my head?

And for those that say "Well you should just keep your apps up to date!" I do try, but the April policy update summary page linked to 9 separate policy pages!  I’m only human, I make mistakes, but I feel Google need to be a little more understanding, just a little warning I would have corrected this.  I do also publish my apps to Amazon and iOS and have no app suspension or policy warnings on those platforms as they do handle this situation better.

I feel that Google is just too big now and is actively trying to remove apps by tripping small developers up.  I wish they would charge more for the developer account, maybe an annual subscription like Apple that if not renewed the apps expire to keep everything current.  Also with the extra money, they could invest in a more personal and fair support structure.

Sorry for the long post everyone, this has been an extremely upsetting situation for me  I hope the post may help others in a similar situation and show the importance of policy warnings (although a warning is normally too late) from Google.  Also, be very careful using third party SDK as they can have many SDKs within that Google at some point won’t like.

It’s a long shot, but if anyone at Google is reading this, please reconsider your stand on app suspension.  It’s simply unfair!  Please give a warning first to correct the issue.

Thanks for reading everyone, I would love to hear your thoughts on this.  For me at the moment, I’ll continue to try and keep my apps up to date, but not sure I can invest any more time developing a new game.  I just wish I had the clout like a larger developer house like Rovio or similar.